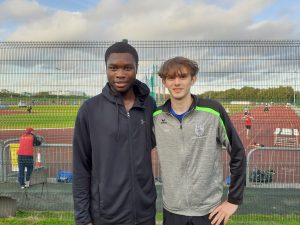 It was warm and dry in Tallaght on Wednesday evening 5th August, lovely conditions for running, at the second Dublin Graded Meeting. Charles Okafor competed in the 200m A race, his first race since the National Senior Indoors at the end of March, over 4 months ago. Running in lane 8 he powered around the bend to put himself in contention coming into the straight, keeping his form and pace reasonably well into a headwind on the home straight to finish third in 22.50 seconds, below his best but no surprise in his first race after such a long layoff. Charles was upbeat after the race, delighted to finally get an outdoor track race under his belt this year, and looking forward to sharpening up with further competition in the coming weeks. The 800m A race was extremely competitive and the two Mullingar Colin Smiths were in action. The elder Colin ran a very aggressive opening lap but paid for it somewhat in the final stages to finish in 1:56.32, off his best but this was his first 800m in a long time and he badly needed to race again. The younger Colin ran a conservative first lap and was full of running in the closing stages, finishing strongly in a new PB of 1:58.09 and will certainly improve on this as he grows in confidence and runs more aggressively in the early stages. Brian Martin has been nursing a recent ankle injury, so he elected to run in the 800m B race where he won comfortably, pulling away to finish in 2:00.75, which will give him confidence for his next outing.