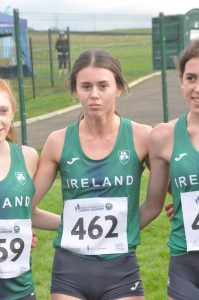 A sizeable number of Mullingar Harriers athletes make the trip to Belfast on Saturday 22nd January to compete in the Northern Ireland International Cross Country held at the Billy Neill MBE Country Park, Dundonald. The event incorporated the Celtic Cross Country with teams from Ireland, Northern Ireland, Scotland and Wales taking part. Among the Ireland teams were Caoimhe Kilmurray and Conor Sherwin who were making their International debuts. Years of hard work and sacrifice paid off for Caoimhe and Conor as they proudly wore the green singlet of Ireland in their respective u/17 races.

Unlike the trip to Sterling, Scotland in 2020 for a similar event where running conditions were atrocious, both the weather and underfoot conditions in Belfast were perfect for running. Strong bonds were formed during the three-day trip to Sterling two years ago and it was great to see the majority of these athletes competing again in Belfast, despite an exceedingly difficult two years with limited championship racing and far from ideal training conditions, as dictated by Government regulations. Huge praise must go to the coaches in the club for giving up their time to keep the athletes fit and focused during this difficult and prolonged period of time.

There were 13 races in total to be contested and the first Mullingar competitors of the day were out in the u/15 girls 3,000m. With perfect ground conditions, the race started at a fast pace and the three Mullingar girls were well positioned as they headed out on the second lap. Adele Geoghegan ran very strong from the gun and took up a  very good position sticking with the leading group of six or seven girls. The eventual winner from Devon in the UK upped the pace  after 1,000m and stretched out the field  and was a comfortable winner in the end. Grace Byrne (18th) and Leah Geoghegan (21st) worked off each other and finished the race strong in very respectable positions. Adele finished 8th in a group of three with only one second separating fifth to eighth. The Mullingar girls finished 4th Club in the team event. Consistent training over the last few years paid off for these three girls.

Next up was the u/15 boys  who also ran over 3,000m. Six Mullingar athletes contested this race with David Burke unfortunately having to withdraw mid-week and everyone wishes him a speedy recovery. An extremely fast start by the leading group set the tone for the race. The hotly fancied UK athlete from Norwich raced to the front, but with Jamie Wallace drawing on all his experience, he let him do the hard work for the first half of the race and sat on his shoulder. A twisting, hilly course similar to what our athletes encounter on their training runs in Belvedere suited all the Mullingar athletes today. Jamie tracked every move of the UK athlete and with 700m to go Jamie made his decisive move and quickly opened a gap and broke away to win in style. Pablo Lozano, getting stronger with every race he has run this winter, was in fifth position for a lot of the race and can only be delighted with his 10th place finish. With Donagh Carey (13th), Luke Greene (16th), Matthew Molloy (19th) and Niall Brady (21st) all finishing very strong, the boys finished 2nd Club. This was an outstanding performance from this group of boys competing against some very strong International competition. Well done to Jamie on a fantastic victory and he oozed confidence and maturity in his TV interview afterwards.

Illness and injury hit our under 17 girls team, so Mullingar had only three athletes in the u/17 girls 4,000m. Caoimhe Kilmurray was competing in her first ever race as an Irish International. Caoimhe is a multi-talented sports person and huge congratulations to her on achieving her first International honour. A large field took to the line as the under 17 and under 20 girls ran in a combined race. From the off, Caoimhe took up a good position in the middle of the pack and was mindful to identify and keep an eye on the under 17 girls. Like all the previous races, a fast pace was set from the gun by a strong international field. The tough fast undulating course suited Caoimhe as she sat in the top 20 group. A strong finish gave Caoimhe 18th place in her age category and she was delighted with her performance in her first taste of International competition. Caoimhe Donohue (24th) and Jessica Cunningham (26th) ran very well and should be immensely proud of their performances.

Following a fantastic victory by Jamie Wallace and a very strong performance from Caoimhe Kilmurray in her first race as an Irish International, Conor Sherwin took to the line of the u/17 boys 6,000m race that was run in conjunction with the under 20 race. Conor has really thrived over the last 2 years. Never one to miss training and fully committed to his training schedule, he got his just reward in selection for the Irish under 17 Development team after a magnificent performance at the National Cross Country Championships in Santry last November. A large field took to the line and with a tight bottleneck 80m after starting, a good start was vital and with Conor gaining experience with every race he has run, he was nicely positioned as the initial sprint start settled into a good lively pace. Tracking all the under 17 athletes in this combined race, Conor ran a very steady race over the 4 laps. Rarely missing a training session on the hills at Belvedere was great preparation for Conor and it was no surprise that he ran one of his best races ever to finish 10th in his age group and also led the Ireland Development Team home. This was a fantastic performance and hopefully will be the first of many performances in an Ireland vest from him. Conor will be the first to acknowledge the contribution of his teammates Ross Killalea and Conleth Mullen, who also competed today. Ross picked up a niggle mid-race and rightly eased up the pace and finished comfortably in the middle of the pack. Conleth as always, gave it his all, and was incredibly happy with his performance against some very strong international runners.

The final race of the day was the Senior Men 10,000m where Jamie Battle was leading the charge for the Ireland u/23 team. Sticking right in the thick of the action, Jamie worked hard all the way and drawing from his well of experience at National and European level, he was rewarded with a fantastic 8th place finish overall, the first u/23 man and leading the Ireland u/23 team to gold. A terrific result for a dedicated athlete.

We witnessed some great performances from all the Mullingar athletes, showing that adhering to the training plans is paying off. An event like today does not happen without detailed planning from our coaches. Thanks to all who train our athletes every week and it is very much appreciated. With Covid restrictions on indoor dining etc relaxed on the day, it was terrific that everyone could stop off on the journey home as a group, and the club treated all the athletes to some well-earned food and refreshments.

Now that Caoimhe and Conor have made their International debuts for Ireland, their names will be added to the International Roll of Honour in the Clubhouse, to bring the total to 119.