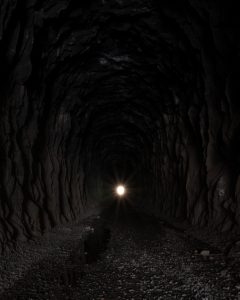 Despite the great National effort in staying home that has worked extremely well to “flatten the curve” and prevent the health system from being overwhelmed, the faint glimpse of light we thought we could see at the end of the tunnel last week has dimmed and it doesn’t look like we’re going to see any great relaxation in restrictions on movements any time soon. Was it simply a mirage caused by the recent spell of fine sunny weather? No, it’s just that the tunnel is longer than we thought. We might be over the worst, unless there is a second wave of infections, but we’re not there yet.

Given the rate of attrition on the fixture list, it is no surprise that Athletics Leinster has taken the difficult decision to postpone all of its scheduled outdoor T&F competitions in May and June until further notice. If circumstances and dates allow, it may be possible to host a limited competition later in the summer. No matter what happens this coming week-end when announcements will be made on what restrictions, if any, can be lifted, the rules on social distancing by at least two metres and the limit on outdoor gatherings to no more than 500 people will surely still be there, which makes it impossible to hold athletics events. We’ll watch with interest what Athletics Ireland decides to do with National fixtures, which would dictate when any Leinster fixtures could be re-scheduled, but a summer without any athletics fixtures is looking more and more likely with every passing week. We won’t even think about the autumn cross country season just yet!

For now, all we can do is our best to stay fit by training at home to keep in physical shape and also combat any “cabin fever” caused by being confined indoors for long periods of time and not seeing friends or wider family. There is plenty that can be done indoors or in gardens, so check the club and the Athletics Ireland website or Facebook pages for ideas on exercise routines, strength and conditioning exercises etc. When training outdoors, remember that you must keep within 2km of home, train alone (unless with other household members) and please remember to follow the guidelines on travel, social distance and keeping well apart from other walkers or runners you might meet on your run.

What were we doing around this time in previous years?

Normally at this time of year many of our underage athletes would be looking forward to the start of the schools T&F season and thoughts would be turning to entries for the Leinster T&F Championships. Of course, life is anything but normal now and while we don’t have any races to report on due to COVID-19, we have plenty of great memories to look back on from last year and earlier to remind ourselves of happier times.

Last year, Eddie Newman completed the London Marathon 2 hours 49 minutes 18 seconds, just outside the top one thousand places of the more than forty thousand that finished the race. That was the fifteenth time in succession that Eddie ran a sub-three hour marathon, and the sixth time under 2 hours 50 minutes.

The year before, in 2018, it’s hard to believe that Jack O’Leary ran his first outdoor 5,000m for Iona College when he ran at the prestigious World famous Penn Relays in Philadelphia. Among the relays are some individual distance races, including the 5,000m. Running in the top seeded race, Jack took full advantage of running with some top class opposition and was delighted to finish in 14 minutes 24.50 seconds, which was a new personal best time for him at the time. Closer to home, Mullingar dominated at the Coralstown 5k by taking 1-2-3 in both the men’s and women’s races. Racing to the front from the start and winning comfortably by a good margin was Kevin Baker (16:08), with Andy Nevin (16:43) in second and John Whitelaw (17:13) in third. Finishing fourteenth overall and first woman was Sinead Whitelaw (18:16), with Laura Whitelaw (19:48) second woman and Susan Glennon (20:51) third woman.

Only a month after winning two race walk silver medals at the 2017 World Masters Indoors in Daegu, South Korea, Sean McMullin travelled to Auckland, New Zealand for the World Masters Games, where he faced a tough competition schedule of three races in five days. Sean proved how tough he was and all the hard work put in at training came good and he took gold in the 1,500m walk, gold in the 3,000m walk and completed the set with gold in the 5,000m walk. Three races, three victories; you can’t ask for better than that!

For now, the club grounds and clubhouse remain closed until we hear that we can relax controls and life can begin to get back to normal again. Our website www.mullingarharriers.com and Facebook page will have updates. We need to continue to do what is asked of all us all to keep our communities safe, so stay home and stay safe.