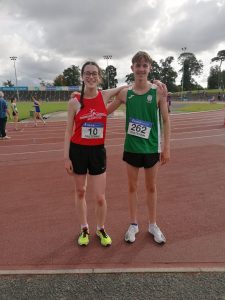 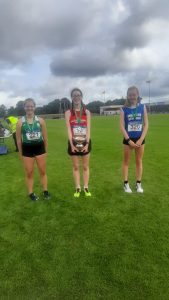 The Tailteann Inter-Provincial Schools T&F held on Saturday 11th September in Santry was the trial event to select Irish teams for the SIAB Schools T&F International to be held in Derbyshire (England) in two weeks time. Given her dominance in race walking in her age group in recent years, there was no surprise that Aisling Lane (Mercy Ballymahon) won the girls 3,000m race walk with ease, well over half a lap ahead of second place. A bonus for Aisling is that she was presented with the cup for best race walking performance at the Tailteann T&F. In the corresponding boys 3,000m race walk, Andrew Glennon (St. Finian’s College) also won very comfortably, with over 150m to spare on his nearest rival. These wins should see Aisling and Andrew selected on the Irish schools team. For Andrew, this will be his International debut, which is a great honour for him, his family, his school, and of course for the Club. Andrew’s older siblings, his sisters Edel, Rachel and Sarah and his older brother Matthew have also represented Ireland, so this will be the fifth Glennon to represent Ireland in International competition, which is a record from one family in Mullingar Harriers. Aisling made her International debut only a few weeks ago in early August and is delighted to have another opportunity to compete in an Irish vest again. Congratulations to them both from everyone at the Club.

Also competing and seeking selection was Ross Killalea (Colaiste Mhuire) who competed in the 1,500m but despite turning in an excellent performance in an extremely competitive race, his fifth place finish won’t be enough to earn selection on the Irish team but he can still be satisfied with a good result in his final track race of the season.