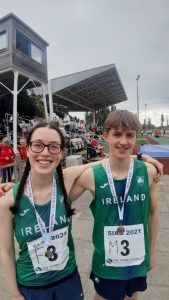 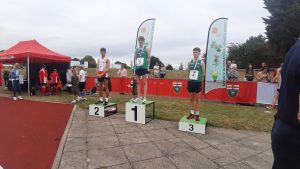 Andrew Glennon had good reason to celebrate on Saturday 25th September when he made his International debut for Ireland at the SIAB Schools T&F International in Derbyshire (England). Competing in the boys 3,000m race walk, Andrew had to dig deep in the closing laps but his class showed through and he prevailed against a late challenge to win and earn a gold medal in his first International competition, which turned out to be the only gold medal won by an Irish boy in the entire competition. In the girls 3,000m race walk, Aisling Lane also showcased her talent with a fine second place finish to take silver. Congratulations to Andrew and Aisling on these great performances, which added to the team points to place Ireland third overall.

Now that Andrew has competed for Ireland, his name will be added to the Roll of Honour in the Clubhouse, bringing the total so far up to 114 since the Club was founded in 1975. Congratulations from everyone at the Club.