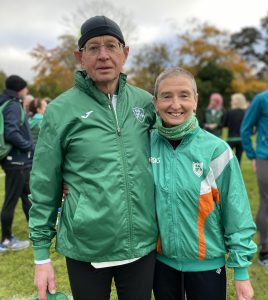 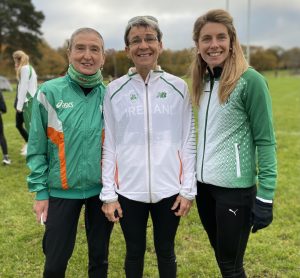 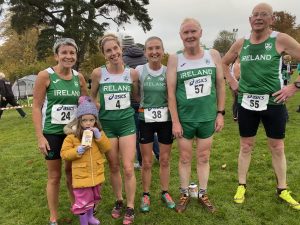 The annual British and Irish Masters International Cross Country generally takes place in November however, due to the Covid-19 pandemic, the event was cancelled again this year but on Saturday 13th November the inaugural Northern Ireland Masters North-South Cross Country Challenge was held in Belfast at the Queen’s University Sports Campus, which proved to be a relatively flat but still a challenging course. The tight course made it easy for spectators to follow the action and give their support to the athletes.

Among the Irish athletes were five Mullingar Harriers, including two seasoned international athletes, Brigid McCabe and Sean McMullin who were delighted to be back representing their country again, and three new international competitors, Sinéad Whitelaw, Maura Dervin and Nicky McCabe. Although there were two races on the day, all the Mullingar athletes competed in the first race, the 6,000m for all the ladies and the men aged over 65 years.

There was an overall team event for the men and ladies, which was based on the total finish times of all the team athletes, not their finishing positions as typically used for cross country team events. The Irish ladies won the team event and took home the inaugural trophy. There was some talk that this event could become an annual event and that would certainly be something for all Irish athletes to look forward to and aspire to compete it.

Congratulations to all five Mullingar athletes that competed with distinction in Belfast, especially to Sinead, Maura and Nicky who made their International debuts and now that they have done so, their names will be added to the International Roll of Honour in the Clubhouse.