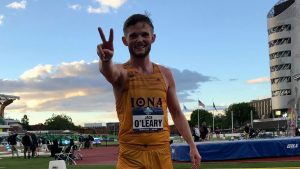 The NCAA T&F Finals are the pinnacle of College athletics in the USA and this year were held at Hayward Field in Eugene, Oregon. Competing for Iona College in the 10,000m on Wednesday evening 9th June, Jack O’Leary knew that had to be on the top of his game and fortunately given his current rich form that was no problem. NCAA finals are legendary for their quality and this race was no exception, with the winner breaking the meeting record that has stood for over 40 years and 15 others recording personal best performances, among them a terrific 28:29.39 PB by Jack, a nearly 8 second improvement on his previous best set in early April, to finish strongly in 16th place. This is a brilliant result at this level and it earned Jack All-America honours. Jack’s time also puts him the second fastest over an outdoor 10,000m in Iona history. Jack has had an outstanding cross country season and now an outstanding track season in the USA and we look forward to seeing him when he comes home for the summer.