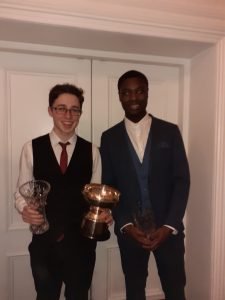 Charles won All-Ireland silver medals for the indoor 60m and 200m and double gold for the outdoor 100m and 200m but the highlight of 2019 was making his International debut for Ireland at the European Youth Olympic Festival in Baku (Azerbaijan) where he competed in the 200m and in the medley relay. Oisin’s award is in recognition of the outstanding year he had in 2019. He won the All-Ireland Junior Indoor 3,000m race walk and the u/18 Outdoor 5,000m race walk. The highlights though were an excellent fourteenth place at the Junior European Cup of Race Walking in Lithuania, which is a Major event and is the race walking equivalent of the European Cross Country, and finishing fourth in the 10,000m race walk at the European Youth Olympic Festival in Azerbaijan.

Leinster also retained the Bishop McFeeley Cup for Best Juvenile Cross Country Region and with Mullingar athletes scoring on seven of the thirteen Leinster teams that won medals, they can take some of the credit for helping Leinster to win this cup. This is great testament to the hard work put in by our outstanding juvenile cross country athletes and their coaches. Congratulations to them all, they can be very proud of themselves and their achievements.