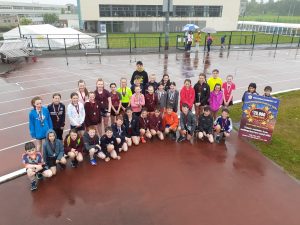 Just some of the young athletes that competed in Athlone

Despite the rain, feedback from parents and participants on the track competition we organised for our younger athletes on Sunday 11th July on the outdoor all-weather track in Athlone IT suggests it was a great success. Despite the weather, the vast majority of juveniles who entered turned up to race, in all nearly 70 youngsters aged 8 to 13 years took part in a sprint and middle-distance race, tailored to their ages. We gave medals to all finishers aged 8 and 9 years, but the older ones competed for gold, silver and bronze, adding to the buzz of competition for them.

We held the event because there is no track and field competition this year for our youngest members, those aged 8, 9 and 10 years in particular. For very many of them, it was their first time to compete on a full size all-weather track, so they were very excited about that and it gave them and their parents a taste of what’s in store when we’ve finished our own track in the coming months.

Many thanks to everybody who helped out on the day and in planning the event, in particular Colm Walsh who was instrumental in its organisation and was a great Track Manager on the day, keeping everything moving along nicely! The event proved so popular and successful that we plan to hold a similar one on our own new track when it’s finished, so watch this space!