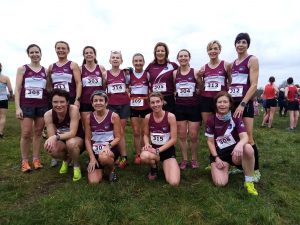 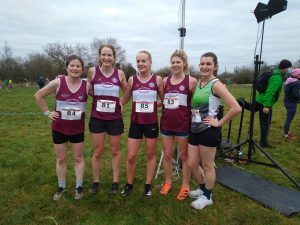 The first Leinster cross country fixture of 2022 took place in Dunboyne. Co. Meath on Saturday 15th January where from a Mullingar perspective, the day definitely belonged to the Mullingar women, winning many individual and team medals. Competition was for Intermediate & Masters men and women and cross country relays for boys and girls. Mullingar had relay teams in each race and a big number of adults entered in the Intermediate and Masters races, the master women in particular, and their numbers were bolstered by members of North Westmeath AC that were on the Westmeath County team. The event was hosted by Dunboyne AC whose volunteers did a fantastic job in the week leading up to the event building the course and were there in big numbers on the day stewarding on the course and at the car parks and approach roads. These events don’t happen without Clubs and volunteers generously giving up their time. The day was cold but dry, so the course stayed in great condition throughout the programme of races giving good underfoot conditions, a real bonus for the athletes and spectators. A minutes silence was held before both the master women race and the master men race in memory of Ashling Murphy RIP who died tragically during the week while out running near her home outside Tullamore.

Before the adults races, we had the Juvenile Cross Country Relay Races that always provide great excitement and fun. It was a great start to the year for boys and girls to get out and run with their club mates over the shorter relay distances. Mullingar has a massive reputation in cross country, but the relay distances are much shorter, too short perhaps for some but that didn’t stop them giving one hundred percent effort and coming away happy after each race. The u/12 girls 4 x 250m saw Lily Walsh, Chloe Bell, Lucy Kilmurray and Grace Murphy put in a great team effort but unfortunately they finished out of the medals. The team of Cillian Galvin, Aonghus O’Reilly, Oisin Clarke and Louis Kiernan came close in the u/12 boys 4 x 250m but finished fourth, just out of the medals but gave themselves every chance. The distance increased for the following races, but the medal drought continued in the u/14 girls 4 x 500m where Tianna O’Leary, Muireann Galvin, Blathnaid Peters and Emma Lagan worked hard but just couldn’t get among the medal places. We came close in the u/14 boys 4 x 500m but despite a great team effort by Conor Walsh, Conor Geoghegan, Greg McDonnell and Jake Bell the team finished an agonising fourth place, just out of the medals. There was no luck either in the u/16 girls 4 x 500m for Muireann Donohue, Lydia McDonnell, Siofra O’Reilly and Muireann Reihill as the team finished out of the medals. Keeping in contention throughout the u/16 boys 4 x 500m, Niall Brady, Luke Greene, Matthew Molloy and Donagh Carey put in great shifts and though they were finishing fast, just couldn’t close the gap on the medal places and finished in fourth place. Medals or not, it was a great experience for our young athletes ahead of the indoor season.

The relays whetted our appetites for the adult races, with the Master Women 4,000m on first. The race included the master men o/65 years of age and they raced alongside the women over the same 4,000m distance. Competition was fierce and leading the Mullingar women home in a fantastic fifth place was Aine O’Reilly, placing second in her master category and with Michelle Bohan only a few places behind (fourth in her master category, missing a medal by just 5 seconds), then Sinead Whitelaw, followed by the North Westmeath pair Treasa Gibney and Marie Masterson, then Maura Dervin (winning her master category), Aisling Corcoran, Michelle O’Halloran, Caroline Mullen, Emer O’Hanlon, North Westmeath AC’s Karen Crean, Joanna Tyrrell making her debut in master cross country, Caroline Boyle, Terri Greene, Patricia Broderick and Brigid McCabe (second in her master category). When the various age categories were sorted, the o/35 team of Aine, Michelle Bohan, Sinead, Treasa, Marie, Aisling, Michelle O’Halloran, Karen and Caroline Boyle finished 3rd Club and 2nd County and the o/50 team of Maura, Caroline Mullen, Emer, Joanna, Terri, Patricia and Brigid finished 2nd Club and 2nd County, so there was much for the very large contingent from Mullingar and Westmeath to celebrate. It was also great to see a team from North Westmeath in the Club team results table. In the Master Men o/65 race, Sean McMullin finished fourth in his master category, missing a medal by just one second, and finishing close behind was Nicky McCabe, both pleased with their efforts.

Moving on to the Master Men 6,000m first to finish for Mullingar was Evan McCormack, followed home by Eddie Newman, Eoin Clarke, Pauric Brady, James Cribbin, Stephen Naughton and James Carton. Such is the standard, there were fierce battles for age category, Club and County awards and unfortunately the Mullingar men didn’t secure any individual or team medals this time, but not for the lack of effort.

Seeing Jenny Algar, Anna Broderick and Amy Mahony finishing well up in quick succession with top 20 places in the extremely competitive Intermediate Women 4,000m all eyes were on Linda Cunningham. Finishing strongly with North Westmeath AC’s Meabh O’Hagan not far behind, Linda didn’t disappoint and provided the vital fourth team score to secure the bronze medals for 3rd County. The Mullingar team also finished a very creditable 5th Club. James Keegan was Mullingar’s sole representative in the Intermediate Men 8,000m where he ran an excellent race with great determination and grit to finish in eighth place, an excellent result in an extremely competitive race.

That finished the day’s racing, where the day belonged to our women athletes, securing three master category individual medals and five sets of team medals between Masters and Intermediate, making it a very memorable day for the Mullingar women.