Harriers on the move … temporarily (16th May) 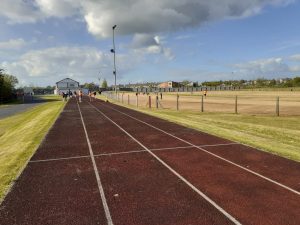 Harriers on the move … temporarily

Knowing that construction of the new all-weather track was due to start in late May, the grass track and infield area was sprayed some weeks earlier to burn off the grass and now looks like a scorched savannah during the dry season. We were able to continue training on it for a while, but it has now been decided that it is no longer suitable and from Tuesday 18th May we have to up sticks and move for the next few months. In a gesture of sporting solidarity, Mullingar Rugby Club has generously opened its grounds to Mullingar Harriers during the rugby closed season, for which we are extremely grateful. Between the Rugby Club, Belvedere and booking sessions on the artificial tracks in Navan or Athlone, we’re confident that our members will be well prepared for the eagerly awaited return to competition in the coming months.