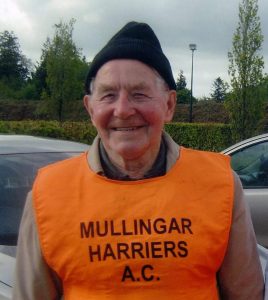 The death of George Bell on Monday 13th September has left a void that will be impossible to fill, especially among our Club members. Being a founder member, he was the life and soul of all gatherings ever since. His contribution was enormous. He was present at all Club functions and fixtures, and his contribution to other local organisations like cycling, GAA, politics and farming was always one hundred percent. A really great outdoors man, his annual flock of geese in his front field were a sight to behold!

George was very straightforward in his thinking, believing strongly in there being a right way and a wrong way in life, and that you should always try to do the right thing. Athletics was his passion, especially cross country and the muckier the course, the better George liked it, and he always made sure to encourage each and every competitor. His fundraising activities for the Club were simply enormous; flag days were special to him, his collection boxes would contain more than double the amount of any other collector such was his legendary capacity to extract money from his legion of friends and contacts. George recently visited our Club grounds to see the new all-weather track and he marvelled at the facilities now available to all Club members, a reminder of the importance of continuing fundraising.

The large attendance at his funeral was testament to the very high regard in which he was held by sports people everywhere, and among the attendance were former Club members and athletes from all the surrounding Counties. The many stories told of his exploits on the sports fields were re-told among all present, including his trip to the World Masters T&F Championships in New Zealand in 1980, which he thoroughly enjoyed. In 2010 he was honoured by Athletics Leinster with an Outstanding Service Award for his services to athletics in Westmeath and in 2014 he received the Westmeath Person of the Year Award from the Cathaoirleach of Westmeath County Council for his special service in the community. Each and every person who ever met George Bell will have their own special memories of a man who gave his all to whatever job he took on. He was a former Club President and an Honorary Life Vice-President and we will miss his wise counsel and friendship at our training sessions, events and meetings.

We extend our deepest sympathy to his wife Sheila, to his adult children Anna, Ger and George, and to his extended family.