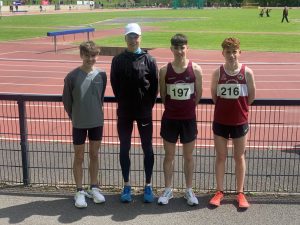 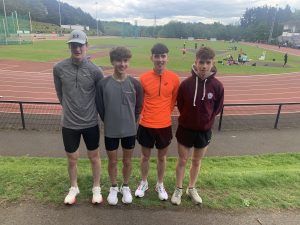 The City of Lisburn AC Track Meeting on Saturday 22nd May at the Mary Peters Track in Belfast was a very successful meeting for some of our junior athletes. First into action were Colin Smith and Diarmuid Fagan in the first of two 1,500m races. Both adopted very positive tactics and were rewarded with personal best times. For Colin it was a day to remember as he finished in a time of 3:59.60. This was a personal best by four seconds and his first time breaking the four minute barrier for 1,500m. Diarmuid finished in an impressive 4:07.86, which is an excellent time for his age group. In the second 1,500m race, Lorcan Mullen ran a strong race to record a time of 4:14.67, with Ross Killalea having a very good season opener, finishing in 4:21.83. Both Ross and Lorcan also achieved personal best times. Eoin Quinn was back on the track over 800m in his first race in two years. He ran a very positive race, tracking the leader through 400m, before confidently taking control and striding to the front. From this point, Eoin increased his lead with every stride and finished a convincing winner in 1:52.74. This was a personal best by almost 4 seconds, a huge margin at that level of 800m running. These were excellent performances by the Mullingar athletes and certainly augur well for the season ahead.