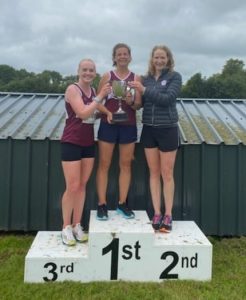 Overcast and cooler made conditions very favourable for running on Sunday morning 29th August for the Bohermeen AC 5 Mile. Bohermeen AC is located just outside Navan in Co. Meath and is well known for hosting very competitive and fast races. This race was no exception and as expected it attracted athletes from all over Leinster and beyond. As is customary under Covid-19 health requirements, to keep everyone safe, the just over 200 athletes were split into two waves at the start, with the quicker athletes starting in the faster first wave. Among the runners was a number from Mullingar, eager to run well and get among the many overall and age category prizes on offer, not to mention the team prizes too.

Taking advantage of the excellent race route and first Mullingar athlete to finish was Enda Seery in 31:03, delighted with his race, which will set him up nicely for the Mullingar Half Marathon in September. Coming close behind was Michelle Bohan (31:47) and Jenny Algar (32:03), winning prizes for 4th and 5th woman respectively, just ahead of Amy Mahony (32:25), and with Gemma McMullin (41:05) providing the vital fourth team score, this put the Mullingar women team on top of the podium to receive the Nicky Phillips Memorial Cup for first woman team.

Well done to Bohermeen AC for getting this race off the ground and up and running. Hopefully there will be many more to come.