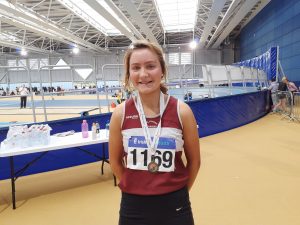 Taking place over two days on Saturday 29th February and Sunday 1st March, the AAI Senior Indoors at the National Indoor Arena in Abbotstown provided an excellent opportunity to see some of the best athletes in Ireland in action, among them a small number from Mullingar. As expected, winning medals at this level is extremely difficult but the Mullingar athletes competed with great determination.

With two heats of the men’s 3,000m on Saturday morning and only the first four and next four fastest finishers advancing to the final, Padraig Moran knew he had his work cut out, but going in the second heat, he knew what he had to do. He kept right in contention from the start and even though he had to drop back a bit over the final stages, he had enough done and enough left in the tank to secure a place in Sunday’s final. It is tough to run two 3,000m races in two days and Padraig gave it his best effort in the final on Sunday but despite a good race he finished out of the medal places but has to be happy to have qualified for a National Senior track final and the experience will stand to him.

There were seven heats of the men’s 200m where the six fastest times would advance to the final. Charles Okafor ran a terrific race, finishing a close second in his heat, not far off his personal best for the distance, and only missed a place in the final by one place. This was his first Senior competition and the experience will stand to him.

Sarah Glennon gave a gutsy effort in the women’s 3,000m race walk, tracking the pre-race favourite and eventual winner Kate Veale (West Waterford) for much of the way but when the pressure increased, Sarah had to drop back and was eventually caught and relegated to third place with three laps to go. A late rally saw her closing hard on the silver medal in the final lap but the finish line came too soon and she had to settle for bronze, though was still very happy to win a National senior medal.

Despite an early break from the pack by one athlete who built so big a lead that she could not be caught and eventually ran out the winner, there was still a dozen in the closely bunched chasing pack of the women’s 3,000m, among them Claire Fagan working determinately to keep in contention. With four laps to go, a surge in the pace saw Claire forced to drop off the pack but she continued to work hard and finished strongly but out of the medal places.

Only the winner and next four fastest times of the extremely competitive heats of the men’s 800m would advance to Sunday’s final. Running in the final heat, Colin Smith ran a very solid race and put himself in an excellent position to qualify with a strong third place finish but he was extremely unlucky to miss a place in the final by one spot, only one tenth of a second away.