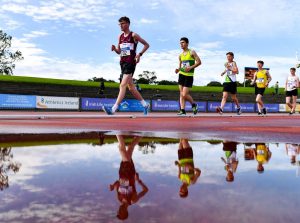 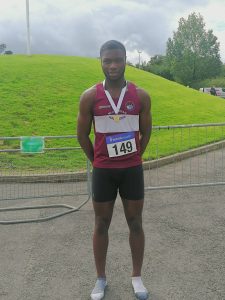 In these Covid-19 times, we’re growing accustomed to a Santry stadium empty of spectators and only athletes and officials allowed in, and that’s how it was for Day 1 of the AAI National Junior T&F on Saturday 5th September. Originally scheduled for just one day, to cope with the very large number of entries and keep within the 200 limit at outdoor events, Athletics Ireland had to add a second day, which will be Sunday 13th September. Athletics Ireland is to be congratulated on ensuring the event went ahead in spite of the significant challenges presented in complying with the Covid-19 health requirements.

Unable to finish the senior walk the week before, Sarah Glennon was looking to make amends in the 3,000m walk. Suffering no problems this time, though she was still not at her best, Sarah put in a better performance but was unable to keep in touch with a surge in pace after one kilometre but pushed on and had to settle for a place out of the medals in fourth place. Leading from the start of the 5,000m walk, Matthew Glennon set a cautious early pace to settle into the race but at the one kilometre mark he injected a bit of pace to open a gap on the field, increasing it with every lap until after a consummate display of race walking he had a commanding lead of half a lap at the bell to come home in first place in 23:23.66. This was a fine display by Matthew and will help him erase the memory of the disqualification he suffered in the senior walk the week before.

Winning his heat of the 100m with ease in a time very close to his best, Charles Okafor lined up in the final as a serious contender for honours and did not disappoint. With a relatively slow start by his standards, Charles trailed in fourth at the halfway point but then got fully into his running and absolutely surged through the field to take the lead and win his first National Junior title in a new PB of 10.92 seconds into a noticeable headwind of 1.3m/s. This was his first time under 11 seconds and there’s no doubt but there is plenty more to come.

The rain came down heavy for the 200m heats but that didn’t bother Charles who won his heat with ease to advance to the final. The final was run in pouring rain and with a stiff headwind on the home straight, so far from ideal for sprinters. Blasting from lane three, Charles quickly made up the stagger on the outside lanes and came into the straight in the lead and continued to drive on to win in 22.16 seconds into a noticeable 1.2m/s headwind to take his second National Junior title of the day.

As the final declaration of athletes in the 1,500m would require more than one race, the event was run in seeded heats, with the overall positions decided on fastest times. Andrew Daly ran in the first heat where he kept in contention and drove hard to the end to finish a very creditable fifth. That left Colin (P) Smith and Brian Martin flying the flag for Mullingar in the second heat. Knowing the times of the first heat meant that those in the second knew what they had to do to get in the medals. After a cagey opening lap, the pace suddenly ramped up and it was race on for the leaders, with Colin and Brian keeping in close contact. By the bell, the pace was so quick and the gap to the front runners too much that both Mullingar men knew they were not going to get in the medal places but pushed on to finish strongly. When the results were combined, the three Mullingar men finished out of the medal places but all gave very good accounts.